Recognizing and Treating Early Signs of Autism: The First Year of Life (Part 1) 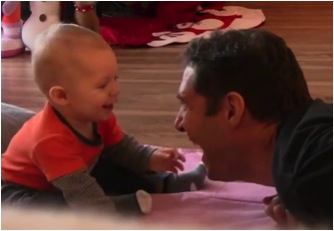 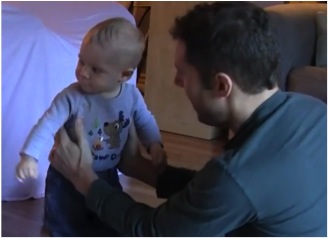 Interactional Synchrony as the lens for seeing Early Signs of Autism

When parents feel perplexed by their baby, professionals need to pay attention.  An infant who looks healthy but fails to elicit or respond to a warm connection with primary caretakers sends confusing and distressing signals to the parent, and disrupts the automatic natural experience of intimacy that emerges in the first months of life.  The earliest forms of interaction are dependent upon preverbal systems of social communication evident in the choreography of affect cueing, sound making, movement, use of force and space, intensity, temporal exchanges and the demonstration of intention. It is not so much what these babies are doing, as what they are not doing, that is worrisome.  They are not seeking out caregivers by following their actions with gaze, or using gaze to initiate, sustain or terminate interaction.  They do not turn toward the sound of their parent’s voice, or mold comfortably to their body. Their movements are not in synchrony with their parent’s voice, nor do they take comfort in physical contact with a parent’s body. Many seem to prefer to focus on inanimate objects rather than on their parents’ faces or voices. The baby may focus on the edge of a receiving blanket or their mother’s sleeve, rather than brightening to the sound of the parent’s voice and taking delight in the expression on the parent’s face. Missing from the interactions are the synchronous affective exchanges Daniel Stern (2010) refers to as the elements of dynamic experience, or forms of vitality. These elements of nonverbal social connection are so automatic one tends to overlook them, unless they are absent, and violate one’s expectations about what it feels like to be with another person.

For example, most newborns take comfort in being held close to the parent’s body while rocking, being spoken to, and gazing lovingly into each other’s eyes.  A moment of connection like this requires integration of sensory and motor systems including the proprioceptive experience of being held close, the vestibular experience of rocking, the auditory experience of listening to the parent’s voice, and the visual experience of gazing into the parent’s eyes.  If integration across these sensory and motor domains is compromised in any way, the whole system may be disrupted, and the emotional meaning of such a moment can turn from comfort and pleasure to discomfort and irritability or avoidance.  Multiple experiences like this lead parents to tell professionals, “My baby doesn’t like to be held,” or “my baby prefers the car seat to my arms,” or “I feel like I am torturing her when I hold her to my chest.”

These infants make the most challenging and disorienting social partners.  In my experience working with infants and parents, it is more likely that parents will look for emotional explanations for the difficulties they are having connecting with their baby than look for sensory motor explanations for why this baby is struggling and seems avoidant.  This is because the primary response the parent is having toward the baby is emotional.  As providers of services to infants and parents, we want to catch these patterns as soon as possible so that small failures of interactive synchrony do not snowball into parental self- perceptions of inadequate ability to parent, or a perception of a baby who doesn’t like his or her mother or father.

The intent of this working paper is to explore how service providers and researchers could begin to identify the earliest signs of difficulty, which I propose are available to be seen as early as 3 -4 months of age.  If we are able to provide intervention at 4 months, the likelihood of using the infant- parent relationship to ameliorate intrinsic risk susceptibilities could prevent the infant from becoming increasingly avoidant of the social environment, and make the best use of social interaction in developing the infant’s “social brain”, Johnson (2001,2011).

To identify the earliest signs, I suggest we shift the paradigm for identifying early signs of Autism from infant behavioral markers, to parent – infant interaction.  By using psychodynamic research on the effect of interactional synchrony on the development of the infant, the field of Autism could better identify and address the core deficits in the disorder as they emerge. The research on early signs of Autism has focused predominantly on finding key markers in the infant’s behavior that signal symptoms seen later as criteria for the diagnosis.  Research focused on typically developing infants and their parents, or infants with mothers suffering from diagnosed depression, or trauma, can lead us to the interpersonal elements for consideration in the emerging relationship between a parent and an infant later diagnosed with Autism.

Research on infant development and the emerging sensory motor organization of the infant gives us a neurobiological foundation for understanding how the infant is constitutionally equipped for relating.  Studies focused on arousal states, transitions between states, attention, and organization of sensory – motor activity in response to stimuli are a window into the influential factors in the infant’s innate capacity to elicit or respond to caregiving. A baby with robust, clear signals to the parent enables that parent to comprehend the baby’s needs and to feel competent and gratified in their parenting. Conversely, a baby whose signals are subtle or appear conflicting or confusing can send a parent into a downward spiral in their self-confidence to parent their infant.

This paper will explore the therapeutic interactions that allow a co-construction of experience to unfold from interpersonally arrived upon patterns of shared experience and mutual regulation between the infant and parent. Vignettes from infant-parent work with infants showing early signs of Autism will be used to illustrate how the parents are helped to share meaningful experiences with their baby through nonverbal exchanges.

Infant-parent psychotherapies with infants and young children who show early signs of not innately knowing how to be with others, offer the therapist unique opportunities to apply current developmental research to the therapeutic process.  Current research based infant mental health concepts such as forms of vitality (Stern, 2010) intersubjectivity (Trevarthen,1998, 2009) and implicit relational knowing (Tronick, 2007 Beebe and Lachman, 1994) will be used to link concepts from research and theory to the practice of therapeutic intervention with infants and parents.   The paper applies research to devise strategies for establishing connections between parents and infants through the dynamic experiences rooted in affect cueing, pacing, movement, sound, temporal sequences, rhythms, use of space, intensity and intention.

The process of infant -parent therapeutic work will be described, particularly focusing on the use of dynamic experience and developmental guidance to help parents understand their infant’s unique sensory, motor, and affective profile, and its effect on their empathy and insightfulness in caregiving.  Small vignettes from treatment sessions serve to illustrate how the therapist attends to obstacles to sensory motor organization and interactive synchrony in the timing and intensity of affect cues while simultaneously attending to any ghosts or conflicts from the parents’ personal histories that are constricting their parenting.  Finally, the work of the therapist in holding the family, timing interventions, finding ports of entry, and interpreting the infant’s functioning while addressing the parents’ internal worlds will be addressed.

Watch the interactional synchrony between this 2 month old and her father to see the cascade of pleasure between them that typically unfolds in the first months of life.  Notice the brightening of the baby’s eyes and her riveted attention to Dad’s face and voice, initiating and sustaining interaction through gaze.  Watch how her arm and leg movements are synchronized with the crescendo and deceleration of her dad’s voice tone, connecting movement and sound as a mutual regulator of interaction across perceptual modalities

In this video clip you can see how a 7 month old struggles to organize his body to sustain gaze with his father.  He rubs his eyes and turns away, avoiding his father’s entreaty to share a moment of pleasure through mutual gaze. As one would expect, the more worried and confused the dad feels, the bigger and more overwhelming his attempts to engage his son become. Dad feels hurt and rejected, and the baby shuts down in an effort toward self-protection from stimulation that is not in a rhythm of sound and motion that he can find inviting.